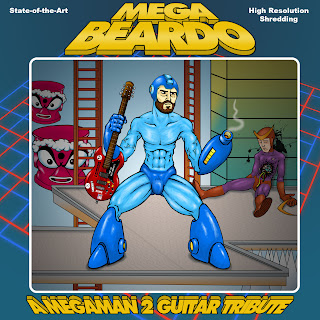 Mega Beardo: A Mega Man 2 Guitar Tribute is now available on beardomusic.bandcamp.com . You could safely bet that the rest of my solo albums will be available on this site from now on. So, if you would like to support what I do, head on over and start clickin'!

Your support is greatly appreciated!
Posted by Mega Beardo at 7:49 AM No comments:

My great friend and fellow 3-Hole Face guitarist, Terry Smith, married his long-time girlfriend in Vegas this past weekend. They had been dating for a coon's age, assuming raccoons live to be 7. But at least they got married in style: at a Howard Johnson, with an Elvis impersonator singing in between vows. All of us groomsmen were sporting tux shirts -- actually, the classiest and most metal of all tux shirts. Though, pseudo-Elvis got a bit too close for comfort when he was grinding away with those hips of his.

That night, I decided to hit up the BlackDiamondSkye tour at the Hard Rock Hotel and Casino. Only VIP seats were available, but I couldn't pass up a chance to see two of my favorite bands, Mastodon and Alice in Chains, play in Vegas. The VIP table was a good choice, because Bill Kelliher and Brann Dailor came up right before Alice's set to hang.

It's so refreshing when a band that you highly respect ends up being just regular cool dudes. I met Anthrax once, and while John Bush was extremely nice and humble, the rest of the band were either not giving a shit or, like Scott Ian, a complete fucking dickhead. So thank you, Bill and Brann, for being a couple of straight-up dudes. And thanks for playing a kick ass set (you should play some Remission stuff, though).

I might get back to work on the Belmont album this weekend. Maybe not. We'll see.

Oh, and did I mention that I will be performing the live debut of Mega Beardo on October 28? Because I am. And it will be awesome.
Posted by Mega Beardo at 6:05 PM No comments:

It seems like jack diddly has been going on lately, but quite the opposite is true, I can assure you. Jeff and I have been writing like mad men (yes, the show) for Descension Rate. It seems we are approaching the end of the writing process for our Dark Tower album. We may have too much for one album at this point, actually.

I've also been collaborating with my friends Joe, Nick, and Mark on a new project. We haven't decided on a name yet, but I can tell you it starts with a C. Feel free to guess. The music we have written is more on the fun side of rock, and less on the technical side. We're writing pretty quickly, with 2.5 songs already fleshed out. So we should be gigging in no time.

Unfortunately, this past month hasn't seen a whole lot of progress on the Belmont album. I did, however, record the demo for the album intro over the weekend. It's simply titled "Simon," and it's been sitting around in my bowl of noodles for two years now. I remember when I first wrote the melody and chord progression, it sounded like a huge rip-off of Between the Buried and Me's "Foam Born (a) the Backtrack." So I had to consciously get it away from that, but I was listening to a lot of BTBAM at the time, so the influence is still there. Quit reading about it, and starting watching it instead. Allow me to explain in Beard-o-vision!:

Posted by Mega Beardo at 1:07 PM No comments: