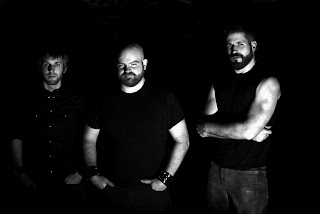 After 3-Hole Face disbanded, Jeff Jordan and I decided to start writing some industrial rock tunes.  We got a 5-piece together for live shows, including live electronic drums by Stanislav of Beloved Dead.  In March 2005, we spent a couple of sleepless nights in New York City to record five demos which we would independently release under the title Level 12.  By "independently release," I mean we just burnt the CDs and printed out the covers ourselves.  We were never truly happy with the sound of those demos, as there seemed to be a bit of a struggle between how everything should have sounded.

We played around in this "dance metal" genre for a couple of years and released our first album Deadly Elegance in 2006.  The five songs from Level 12 were re-recorded for the album.  To promote the album locally, we released the song "Tin Cradle" as a single, for which we asked our friends in the music community to do remixes.  Librarians, Beloved Dead, and Maximum Headlessness were among those that offered their very original take on the tune.  The original song along with six remixed versions were released as a single E.P. in 2006.

Soon after, our rhythm guitarist departed, leaving me to take care of all live guitar duties.  We acquired Mike Beck (Dirt Star) to play live keyboards.  This line-up did not last long, and Descension Rate ended this cycle as a 3-piece playing shows in the Richmond and Virginia Beach area in July 2007.  Honestly, Jeff and I grew bored of the sound.  Jeff went on to form V.I.A., a strictly electronic dance band (think EBM), for which I played keyboards and guitars in 2008.

Fast forward to August 2009; Jeff and I decided to get the band back together with a completely different sound.  A farewell show was planned for original bassist Doug Lilly, as we ushered in a new line-up completed by bassist Eric Gill and drummer Kevin Post (of The Emergency! and '85 Flood fame).  This new sound saw Jeff and I drawing more from our varied metal roots.  Jeff brings more of the black and death metal influence, while I mix in my influences from 80s thrash metal and more groove-oriented riffage.

We wrote fourteen songs to be part of a two-album concept based on Stephen King's Dark Tower series.  The first album Creatures of Discordia was released in December 2011.  The second album will be released in the last part of 2012. 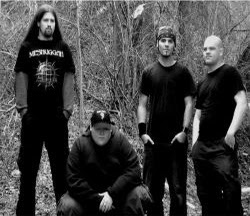 3-Hole Face originated in Jane Lew, WV.  I'm not familiar with how the band actually started or who was in the original line-up, but co-founders Terry Smith and Jonathan Hicks released the first album Departed in 2000.  At the tail-end of 2001, Terry asked me to join the fold as the second guitarist.  After a slew of vocalist auditions, Hicks returned, and fellow Jane Loser Rick McCauley was called up for bass duties.

After releasing Scars, an E.P. of new and live tracks, Rick split to form his own band.  Jeff Jordan, then former vocalist of Loss of Will, joined as keyboardist while Terry picked up the bass.  This line-up recorded the full-length album The Dying Machine and released it in early 2004.  In July of that year, Terry moved to Richmond and joined Separation, Jonathan joined Hell-Forged Hands, and Jeff and I went on to form Descension Rate.

Fast-forward six years, 3-Hole Face (including Rick) reunited for a one-time show to raise money for St. Jude's Children Hospital.  Terry has been working on new 3-Hole Face tunes off-and-on, but their release possibilities are unknown at this point. 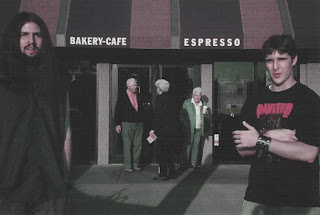 Back in August 2003, a couple of guys had a clear five-day schedule. What do you do in that situation? You form a band, write seven songs, and record it all in that five day period. In this case, we have the formation of Sweet Cuppin' Cakes.

That debut E.P. sparked some interest and raised some eyebrows in a town where metal music was not so prominent. After playing their first show the following year, the members of Sweet Cuppin' Cakes decided to write and record 15 more tracks for their sophomore effort entitled Sweet Cuppin' Cakes II: Part 3, a lengthy outing that welcomed the inclusion of a more progressive sound.

Not a band to be concurred by boredom, Sweet Cuppin' Cakes quickly got on the fast track to  recording an album of covers, simply titled Pleasure Chest, bringing together an eclectic group of artists such as Michael Jackson, Rick Springfield, Talking Heads, The Bee Gees, and Genesis.

After the release of Pleasure Chest, the boys in Sweet Cuppin' Cakes ended the band and reformed it within a four-day period. This resulted in the writing and recording of their epic 75-minute final album Oldies, which was released in limited quantities in June 2005.  Four albums in 22 months. Not too shabby, huh? 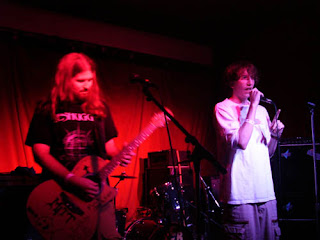 We moved onto doing original material, which composed most of the second album Pure Mood Swings (which also included a couple of covers).  The songs we wrote usually dealt with local TV personalities, dumb internet videos, or idiots we knew in real life.  We played out live a few times and always got a great response.  In 2006, we released our final (?) album Power Dying, the cover of which features the infamous Fat Bitch on Dirt Bike (also a song title).  We played our final (?) show in November 2008. 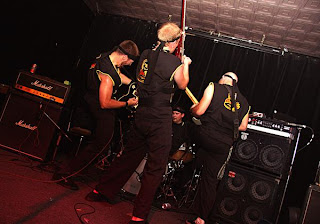 Morgantown was having an 80s tribute night to raise money for charity.  The show-runner came to Post and Joe about getting a band together.  I was asked, along with fellow guitarist Josh (Down July, Caterpillar Scheme,) to join the fold.

Ah, yes.  The name.  We decided to cover nothing but songs from Karate Kid and Rocky soundtracks while wearing Cobra Kai gis.  We thought it was just going to be a one-night thing.  However, the opportunity to play a Nirvana tribute night arose, and we were asked to join in.  We went by the name Bulletproof Tiger that night (and played sans Josh.  He moved).  We brought Karate Balboa back when we were asked to play the 90s tribute show in March 2010.  This time, Jeff Jordan joined us on stage for some keyboard and guitar stuff.  Check out our obnoxious version of "What's Up?" below: 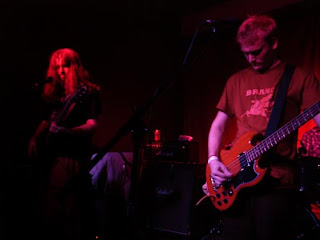 Late 1997 saw the beginning stages of what later became Evol Kleavage. Named after someone's sloppy penmanship, the members of Evol Kleavage found themselves jamming in their sophomore guitar class in high school. At that time, there were no vocals, I was on bass, Joe played guitar, and Tim played drums. Once the class ended, we decided to keep jamming. Joe and I switched instruments, and by April 1998, we were playing our first show in Morgantown.

We spent the next couple of years playing shows in the corner cafes and bingo halls around Weston and Jane Lew, WV. As we headed to WVU, we ended up having to take a couple years off due to lack of time and places to practice. In July 2002, we recorded our E.P. ¿y qué? with producer extraordanaire Mark Poole at Zone 8 Studios on a broke-ass shoe-string budget. A lot of the album was either live from the floor or one-takes.

We would poke our heads out into the local music scene every once in a while until our last show on August 5, 2004.  Because of the extreme diversity in the musical interests between the members of EK, we were able to slowly but carefully craft our original material into a small catalogue that is diverse in itself. Evol Kleavage wasn't the most frequent band on the music scene, but when we did play, we knew how to rock out. 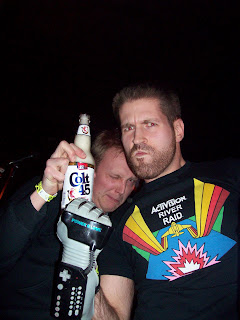 In 2002, two friends working at a vintage movie theater in Morgantown, West Virginia, decided to join forces in a Nintendo-themed hip-hop group.  The result was 8bitz, consisting of DJ Koopa Killa and Emcee Shyguy.

Although the tracks were mostly recorded in 2002, their album Experienced Playz wasn't finished until sometime in 2005 and not officially released until 2006.  However, 8bitz had obtained a large cult following in the Morgantown, WV, music scene way before anybody had a hold of the songs.  With five insanely good tracks in their arsenal, these guys didn't just put on a show, they put on an event.

I helped these guys out in a variety of ways. I recorded a guitar solo for the track "Drac Attack" (which is about Castlevania), I recorded vocals for the secret track on the album, I produced some of the vocal tracks for the song "Da Wizzert," and I mixed portions of the album as well.  I even did some over-the-phone consulting. I remember getting phone calls from these dudes asking stuff about The Legend of Zelda and Nintendo Power so they could use them for lyrics.

When I was available, I would always play with these guys live. Most times, I just played my "Drac Attack" solo, other times I stayed on stage for backing vocals. I even took DJ Koopa Killa's place during a live performance on New Year's Eve 2008 for the song "Konami Kodez."

So even though I'm completely biased, 8bitz is still the most clever and fun Nintendo hip-hop you'll ever hear. 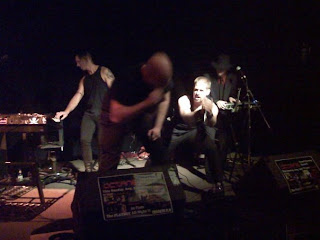 During Descension Rate's hiatus from 2007 to 2009, Jeff Jordan (vocals) decided to put together an industrial/EBM project.  He wrote and recorded all of the tunes and initially got Stanislav (Beloved Dead, Descension Rate) and Jason Frantz to play keyboards.  In April 2008, I was brought in for additional keyboards, rhythm guitar, and vocals.  The project was well-received in Morgantown, and we normally played at big dance shows like MayDay!.

Once Descension Rate got back together in August 2009, Jeff put V.I.A. on hold indefinitely.  Though, I wouldn't be surprised if he got it up and going again in the future.  He wrote some damn good songs. 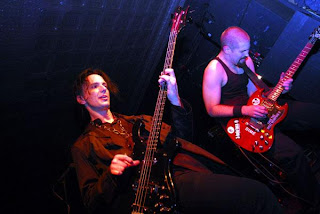 My time with Beloved Dead consisted of a one-off gig at a Black Sabbath tribute show. Frontman Stanislav needed someone to play those monstrous Iommi riffs while he played bass and sang lead vocals.  I'll have to admit, this was one of the most fun shows I have ever played.  Something about the energy of that show really clicked.

Beloved Dead was formed by Stanislav near the year 2000 in Tampa, Florida.  He brought the band up to Morgantown, West Virginia; I ended up meeting him sometime in 2003, I believe.  At the time, Jeff and I were still playing in 3-Hole Face.  Eventually, Stanislav got Jeff to play rhythm guitar for Beloved Dead.  That line-up released two albums, the first of which being In Memoriam...

Stanislav now lives in Knoxville, Tennessee, and I believe he plans to continue doing Beloved Dead in that scene with a new line-up.

Black Hole Zion is the collaboration between myself and fellow local musician Mark Benincosa (of Screw-Worm).  We had known each other through 3-Hole Face and Screw-Worm playing shows together quite often in the local music scene.  He came to me in 2007 with some ideas for some tripped out concept album about time travel.  We spent a couple of years meeting every couple of weeks and fleshing out about 9 or 10 songs.

The album is still somewhat in the works.  I recorded my guitar tracks in June of 2009.  Our good friend George (Baghead and Threat Signal) came down for a couple of days and absolutely nailed the drums tracks.  I hope that the album will see the light of day at some point.  Collaborating with Mark were some of the most fun song-writing sessions I've had, and I think we came up with some pretty intense music.